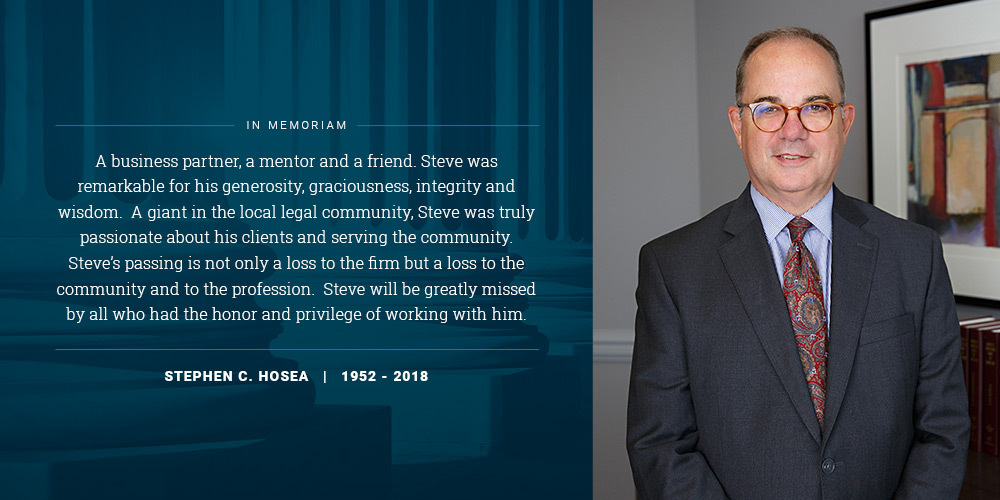 McNamee Hosea is deeply saddened to announce the passing of its co-Founder and President, Stephen C. Hosea. Steve passed away on Saturday, October 6, 2018, after a long battle with lymphoma. He was 66 years old.

Steve graduated from the University of Virginia, with a B.A. in History. After deciding to join his future father-in-law in the practice of law, Steve enrolled at the University of Baltimore School of Law, graduating in 1979. He also received his Master of Laws in Taxation from Georgetown University Law Center. He then began practicing law at the firm of Beatty & McNamee in Hyattsville, Maryland, quickly achieving partner. After several years of practicing, Steve had a vision of how to more effectively serve his clients, so he and Dave McNamee left to form what is today the firm of McNamee, Hosea, Jernigan, Kim, Greenan and Lynch, P.A. (founded as McNamee & Hosea, P.A. in 1982) located in Greenbelt, Maryland. In 1993, the firm expanded its local footprint into Anne Arundel County, Southern Maryland and the Eastern Shore areas when it opened its first Annapolis office.

Steve focused his practice areas in business law and trust and estates. Over time, he assembled a diverse and experienced group of attorneys who would fully service the firm’s business clients. While he represented some of the area’s most influential business leaders and finest privately held companies, he also represented small business owners and individuals. It was his ability to seamlessly navigate between these challenges that separated Steve in the eyes of his clients. In fact, he took great pride in his cross representation of the local business community. He understood that the small enterprise starting out, with the proper guidance, would one day become a sustaining business, and client. He enjoyed becoming part of the team and creating a lasting partnership.

In addition to maintaining his practice, Steve served as the Firm's President as well as chairing the Board of Directors and Managing Principals Group. And while he was intimately involved in the decision-making process, he also realized a law practice was similar to the businesses he represented.

In addition to law, Steve served many charitable and service organizations, generously giving his time to worthwhile causes. He had many interests outside of the office, including golf, theater and following his Virginia Cavalier basketball team. Over the past several years, he spent considerable time assisting the Maryland Theater for the Performing Arts with the development of a performing arts center in Annapolis.

His example and values - hard work, honesty, integrity, trust - greatly impact all who had the privilege to work with Steve. He will be greatly missed.

Steve is survived by his loving wife, Lee; their son Bill and daughter-in-law Claudia; and two grandchildren.

In lieu of flowers, those who desire may send memorial donations to support cancer cell therapy research to:

University of Maryland School of Medicine