Esther A. Streete and Charles H. Henderson Appointed as Principals 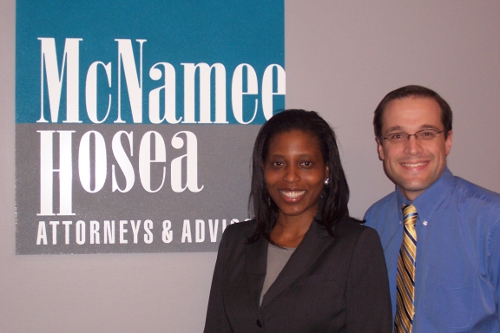 The Law Firm of McNamee, Hosea, Jernigan, Kim, Greenan & Lynch, P.A. is pleased to announce the appointment of Esther A. Streete and Charles H. Henderson as Principals of the Firm.

Mrs. Streete's primary areas of practice are Estate Planning, Tax Consulting and Corporate and Business Formation and Planning. She received her JD from University of Maryland School of Law, Baltimore, Maryland in 2000. She received her LL.M from the University of Baltimore, majoring in Taxation in 2004. Mrs. Streete is admitted to practice in Maryland and she is a Certified Public Accountant licensed in the state of Maryland.

Mr. Henderson's primary area of practice is Employment Law. Receiving his JD from Catholic University of America, Columbus School of Law, Washington D.C. in 2003, Mr. Henderson is admitted to practice in Maryland (2003), U.S. District Court, District of Maryland (2004), and the U.S. Court of Appeals 4th Circuit (2007).