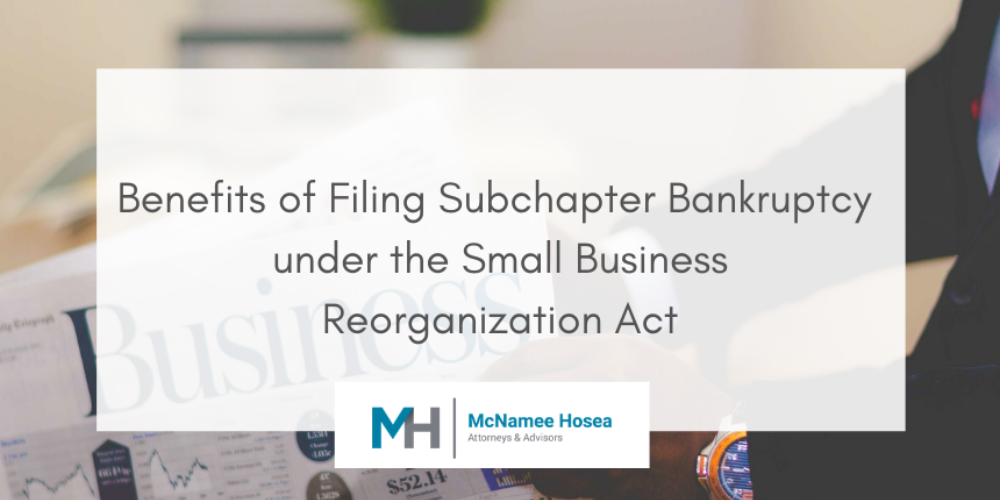 Two recent laws have greatly increased the utility of the Chapter 11 process to small businesses.  The Small Business Reorganization Act of 2019 (SBRA) was enacted in August 2019 and became effective on February 19, 2020.  At the time it was enacted, it creates a new subchapter of Chapter 11 (SubChapter V), under which most business Debtors (including individuals with primarily business debt) with less than approximately $2.7 million in debt could participate in a streamlined Chapter 11 process designed to be quicker and cheaper.  Then, on March 27, 2020, as a result of the COVID-19 pandemic, Congress enacted the CARES Act, which increased the SBRA debt limit to $7.5 million for individuals and companies that filed before March 27, 2021.  The increase in the debt limit greatly increased the universe of companies and individuals eligible to file under the SBRA.

There are two central changes that are beneficial to small business debtors.  First, the SBRA eliminates the traditional Chapter 11 absolute priority rule, allowing the debtor’s owners to retain their interests without contributing new value or paying creditors in full.  This is significantly advantageous to debtors who are reliant on the continued contributions of their owners to the business but who otherwise would not be able to confirm a plan where their owners remain in control.  It is especially important to individual debtors who otherwise theoretically could be forced to sell nearly all of their assets in order to confirm a plan.  This provision alone significantly increases most small business and individual debtors’ chances of confirming a plan.

Second, the Court may confirm a plan even if no creditor votes in favor of the plan.  Instead, if the debtor is unable to obtain a sufficient level of votes, the Debtor may obtain a discharge by paying its disposable income received over a three to five-year plan to payment of creditor claims. While the concept of disposable income is unclear under this relatively new law, it is generally assumed that courts will not require debtors to pay more than they can reasonably afford, while setting aside sufficient funds for emergencies.  This is significantly favorable to debtors who would otherwise have trouble obtaining votes for a plan, including debtors who owe most of their debts to a single hostile creditor.

There are other smaller advantages which make the process more efficient.  No creditors committee will be appointed unless the court orders it.  No disclosure statement is required to confirm a plan.  Creditors cannot propose plan.  Debtors need not pay U.S. Trustee fees.  These changes will make the Chapter 11 process significantly more cost-effective for a Chapter 11 debtor.

Finally, one revision has a significant benefit applicable to individual debtors who have used their homes as collateral for small business loans.  Unlike in traditional Chapter 11s, the SBRA allows debtors to modify the terms of, and potentially reduce the amount owed on, certain residential mortgages where the underlying loan was used primarily in connection with the debtor’s business.

Confirming an SBRA plan requires the assistance of experienced counsel.  McNamee Hosea has represented both debtors and creditors in SBRA cases as well as traditional Chapter 11 cases.  Contact one of our experienced Bankruptcy Attorneys today.